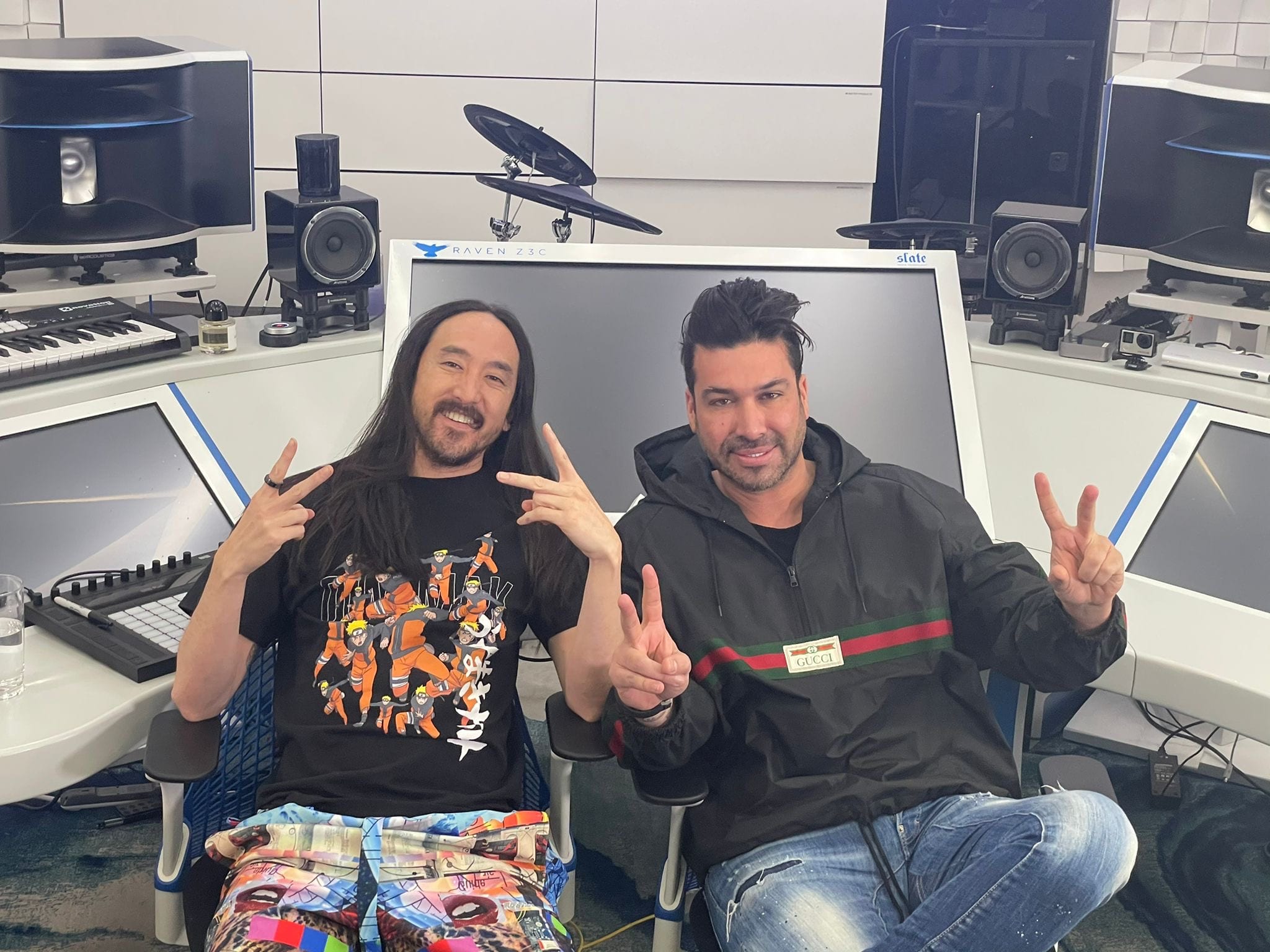 2x-Grammy-nominated artist Steve Aoki has teamed up with GATTÜSO and Aukoustics to create a modern reimagination of R.E.M’s “Losing My Religion,” featuring MKLA. MLKA’s euphonic vocals glide over the animated beat, as she sings the instantly recognizable lyrics. With a driving beat and energetic dance floor drops, the group fashions the ideal summer anthem. Listen here: smarturl.it/LosingMyReligionSA

While this marks the first joint single between these artists, Aoki previously called upon GATTÜSO to remix his Sting and SHAED collaboration “2 In A Million,” as well as his single “Popcorn” with Ummet Ozcan and Dzeko. Seeking a fresh collaboration, Aoki invited GATTÜSO to his Las Vegas studio to workshop some songs. Steve heard

GATTÜSO’s “Losing My Religion” demo, loved it and immediately went into the studio to rework it with his signature Aoki sound.

“Losing My Religion is my favorite of all R.E.M. songs, and I loved them growing up as a kid,” Steve Aoki shares. “It was time to bring it back and make a 2021 version for the dancefloor that people wouldn’t expect. We flipped it and made it special.”

GATTÜSO adds, “Steve had a clear vision for how it would need to be sculpted and I learned a lot in the process. It’s great to see this plan come together after a lot of work, and I’m excited for everyone to hear it.”

On July 9, Salt Lake City-based fans will get to hear Aoki and GATTÜSO perform the song together in-concert for the first time ever at SLC Live.

Steve Aoki, the two-time Grammy-nominated producer/DJ is one of today’s most successful American cross-genre artists, collectively counting 2.8 billion music streams on Spotify. As the founder of the trendsetting record label, events/lifestyle company, and apparel line Dim Mak Records, which he founded in 1996, Aoki has helped launch the careers of global acts like The Chainsmokers, Bloc Party, The Bloody Beetroots, The

Gossip, and The Kills, among many others. Dim Mak today counts more than 1,000 official releases from the biggest acts and most buzzing newcomers across EDM, indie rock, hip-hop and beyond over its two-decades-plus discography. As a solo artist, Aoki boasts a lauded discography that includes: Wonderland (2012), his debut solo album, which garnered him his first-ever Grammy nomination for Best Dance/Electronica Album; hip-hop centric Kolony (2017), and the Neon Future series, which includes ‘Neon Future I’ (2014, certified gold by the RIAA), ‘Neon Future II’ (2015), ‘Neon Future III’ (2018) and the recently released ‘Neon Future IV’ (April 2020); which has rocketed in streaming to date and received praise from singles such as “Maldad” ft. Maluma and “Let It Be Me” ft. Backstreet Boys. Recognized by Forbes as one of the top 5 world’s highest paid DJ’s and the world’s hardest working DJ, Aoki is “one of the most in-demand entertainers in the world” (Billboard), counting more than 250 tour dates per year. In 2012, Aoki founded THE AOKI FOUNDATION, which primarily supports organizations in the brain science and research areas with a specific focus on regenerative medicine and brain preservation. Most recently, Steve Aoki released hiscritically acclaimed memoir entitled BLUE: The Color of Noise published by St. Martin’s Press.

New York City-based DJ, producer and remixer GATTÜSO (AKA Reem Taoz), is quickly making a name for himself on the global dance music scene. He hit the ground running in summer 2018 with his first original production “Who We Are,” and in just over a year’s time he signed an exclusive record deal with legendary dance music label Ultra Music.Appearing 3x’s on Billboard Dance Radio chart, his songs have been streamed over 300 million times on Spotify and Apple Music, have been released on Armada, Enhanced Music, Spinnin Records, Future House Music, Ultra Records, and have been regularly featured on the top editorial playlists. He has received strong support for his remixes for Sam Feldt and R3HAB, who’s hit “Lullaby” with Mike Williams, propelled GATTÜSO to the cover of Spotify’s influential “Mint” playlist. His music has been endorsed by top artists such as Tiesto, R3HAB, Galantis, Sam Feldt, Steve Aoki, Laidback Luke, and many more.GATTÜSO’s collaboration with Disco Killerz, “Million Things,” topped the Billboard Dance Radio Airplay and Mediabase charts, was the #1 EDM song of the week on Music Choice, and named a Sirius XM “BPM Breaker.” Capitalizing on a great upward momentum, his follow up “When In Rome” again rose to the top of the charts. In April 2020, his debut release, “Walk On Water feat. Kat Nestel” on Ultra Records charted Top 40 on both industry charts, Billboard Dance Radio and Mediabase.Jumping from the studio to the DJ booth, GATTÜSO brings his unique take on house music to an electrifying performance on the stage. Musically, GATTÜSO delivers the perfect balance between commercial dance music and hard club tracks, in a high energy set with dazzling 3D visuals.GATTÜSO closed out 2020 with strong

momentum, with his latest release on Ultra Records, “Bring That Back,” on multiple New Music Fridays around the world, and currently at #1 on Spotify’s Dance Rising playlist. His collaboration with R3HAB, “Creep,” was the first official Mint Single, in the exclusive Spotify Singles series, and was featured on 40 New Music Fridays around the world. The song has been streamed over 80 Million times to date and continues to grow. In April 2021, GATTÜSO launched his radio show, “Push The Reds” on Insomniac Radio and will be kicking off the “Push The Reds” 2021 Summer Tour at the start of July, starting in Atlantic City and continuing on through LA, Denver, San Francisco and more cities TBA.

Multi-talented DJ, Songwriter, and Producer Eric Aukstikalnis, known professionally as Aukoustics (Auk), has been making waves in the music industry since 2018 when he left his hometown of Worcester, Massachusetts for Los Angeles in pursuit of his dream career as a Music Producer. In 2019, Aukoustics produced and co-wrote Galantis & Dolly Parton’s hit single “faith” featuring Mr. Probz. The record dominated U.S. iTunes Dance and Billboard Dance/Electronic charts reaching over 100 million streams worldwide. Aukoustics also co-produced Galantis and JVKE’s new single “Dandelion” before his most recent release with Dynoro featuring 24KGoldn on “Monsters.” Memorable for his intoxicating musical abilities and charisma, Aukoustics broke into the scene as a DJ with his remix of the classic Frank Sinatra “Fly Me to the Moon” in June 2020 and has most recently gained over 150,000 monthly listeners on Spotify with single releases “Stars In My Eyes,” “Wasted On You,” and “Missing U.” Aukoustics is an adaptable, ever evolving producer who aims to translate his infectious high-energy into his music in an effort to promote positivity and feel-good vibes. With his passion and unparalleled enthusiasm, he’s dedicated his career to breaking barriers while challenging the norms of music. According to Aukoustics, “this is just the beginning of what’s to come” from the multi-faceted composer.

Michaela Renee Osborne, known professionally as MKLA, a globally recognized artist from Toronto, Canada. In 2018 she co-wrote her first feature hit ‘Save Me’ with Vintage Culture and Adam K, reaching top 10 on Billboard Dance. Continuing with newly released tracks like ‘Never Leave You’ co-produced with Lucas Estrada, a remake of MGMT’s ‘Kids’ with KSHMR and ‘Let Me Go’ co-produced with Alok and KSHMR, with a music video she self-directed and produced. In under 2 years MKLA’s catalog has gained over 100 million streams globally. She is a singer, songwriter, and producer who truly believes in creating meaningful songs with people she believes in artistically. A pioneer against the battles she’s faced as a young female artist in the LGBTQ+ scene, MKLA is an advocate for equal representation and creative expression.